CD BioGlyco has been committed to sialic acid research for many years and has accumulated rich experience. We are proficient at analyzing sialylated glycans and glycosylation in living cells and animals via metabolic glycan labeling strategy.

Sialic acids are a family of acidic nine-carbon monosaccharides widely distributed in higher eukaryotes and some bacteria and play important roles in many physiological and pathological processes, such as regulating cell-ligand interactions. N-acetylneuraminic acid (Neu5Ac) is the most common form of sialic acid. Enzymes play an important role in the metabolism of sialic acids, such as catalyzing the synthesis, removal, and degradation of sialic acids. In the human body, uridine diphosphate (UDP)-N-acetylgalactosamine (GalNAc) 2-epimerase (GNE) catalyzes the conversion of UDP-GlcNAc to N-acetylmannosamine-6-phosphate (ManNAc-6-P) in the cytosol. Then, ManNAc-6-P is sequentially converted to Neu5Ac catalyzed by Neu5Ac-9-phosphate synthase (NANS) and Neu5Ac-9-phosphate phosphatase (NANP). Finally, Neu5Ac is translocated to the nucleus to generate cytidine monophosphate (CMP)-Neu5Ac under the action of 5′-monophosphate-N-acetylneuraminic acid synthetase (CMAS). 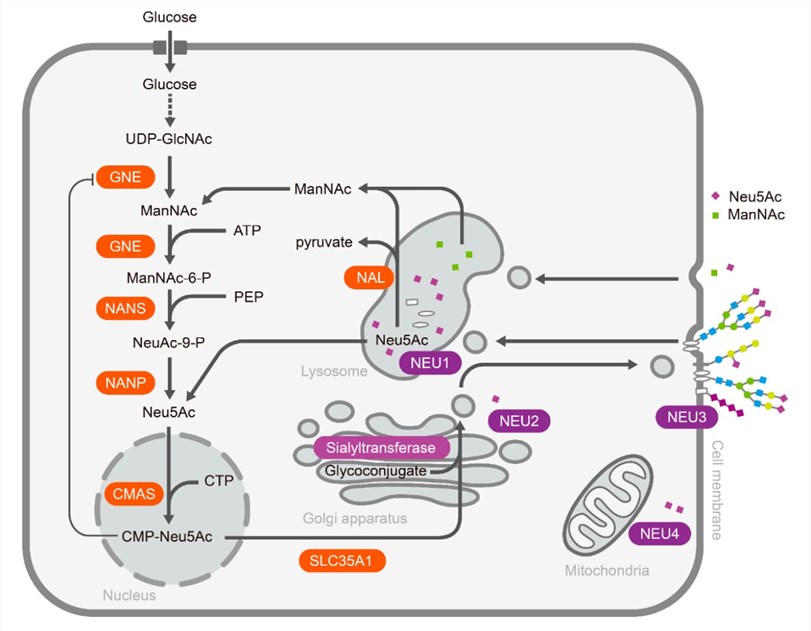 CD BioGlyco has extensive experience in the analysis of sialic acids. Our perfect analytical strategies and experienced researchers provide full assurance for our clients' analytical results. If you are interested in our metabolic glycan labeling strategy, please feel free to contact us for more information.

This service is for Research Use Only, not intended for any clinical use.

CD BioGlyco is a world-class biotechnology company with offices in many countries. Our products and services provide a viable option to what is otherwise available.